Galei Zahal, Broadcasting Station of Israel Defense Forces from Tel Aviv-Yavne. This 10Kw station was observed on 15850 khz from 1849 hrs to 1959 hrs UTC on 21 June 2013. Programming was in Hebrew and consisted of  talk with Hebrew and English songs.  At 1853 UTC a song of Michael Jackson was played. At 1858 UTC  Galei zahal announcement and advertisement of Galei zahal radio and followed by news headlines.

Signal (SINPO) at 1849  UTC was 25232. weak signal strength degraded largely by atmospheric noise and  moderate fading, otherwise music and speech was audible, but not always clear.

Reception report  was sent by email shortly after listening to the station and via snail mail with one IRC on 22nd June, 2013. 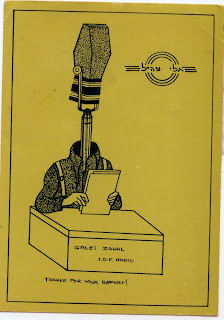 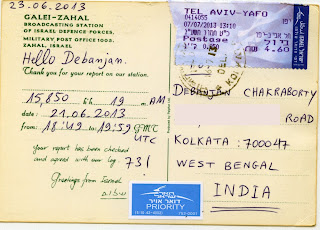 The above  QSL verification card arrived in the mail on 17 th July 2013.